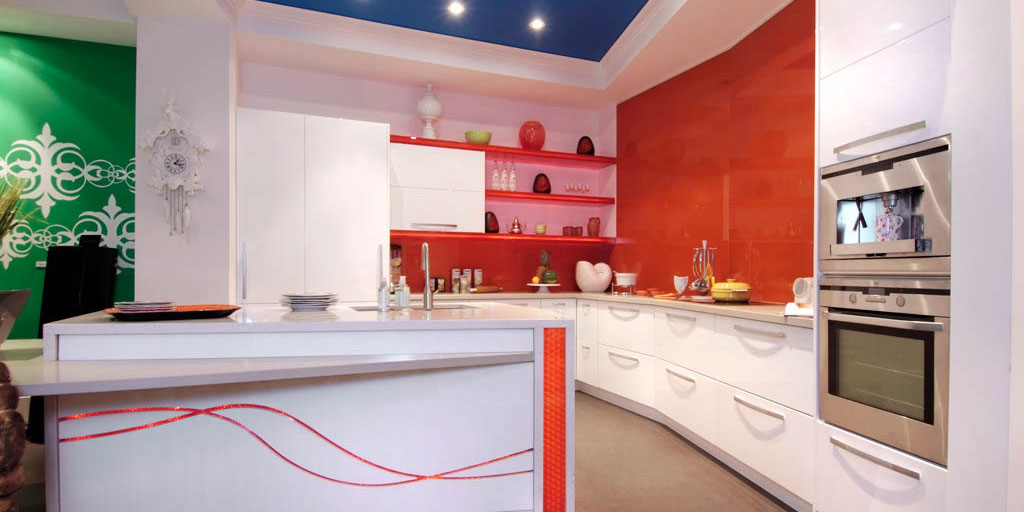 Working with Janette Ewen is always exciting: she is known for pushing the envelope in design. The 2008 Dream Home project was no exception. Janette forwarded a small scrap of stationary with a goldfish on it to the Bamco design team with a message that said “make the kitchen look like this.” So from then on the kitchen was known as the “Goldfish Kitchen.”

Points of Colour and Inspiration

White Gloss: High gloss is in and will always be a timeless look for European kitchens. White is the backdrop for the eye-popping orange of this unique kitchen.

Orange Bencore: This was the focus colour for the goldfish kitchen. The Bencore product allowed us to add texture to represent the scales of a fish.

CNC Panel on Island: Gentle, iridescent orange waves, reminiscent of a rolling sea, were chosen to subtly represent the fish.

What the Media Said about the Goldfish Kitchen

I recently had the chance to work with Bamco at the National Home Show. Together we designed and created an amazing kitchen for the 2008 Dream Home. The bright orange kitchen featured the best in design technology, innovative appliances and elegant, trend-setting cabinets. The kitchen was the highlight of the home, and show attendees and press alike raved about the overall design, quality of construction and innovation... The Dream Home Kitchen created by Bamco just goes to show that when good design meets the ultimate in craftsmanship, Canadian design can excel on a world stage!

Janette Ewen, Co-host, Inside the Box with Ty Pennington

A showstopper...that creates a vibe reminiscent of the sleek modernism of a 1950’s kitchen.

The Goldfish Kitchen also received attention from many other national media outlets, including The Globe and Mail and CTV. The kitchen was featured in several international design magazines and on the Razor Red design show in Hong Kong.